Any regular readers out there may have noticed a drop recently in blog posts, don’t fear this was a temporary pause while we concentrated on a few other projects. One of these is a new portal site which should be coming soon, including a new custom film timelines generator.

Another cool thing we have been doing is prototyping new potential features for Histropedia. One of these features is Colour Coded Timelines, and although we can’t yet offer you the ability to colour code timelines, we have started creating some colour coded timelines for you to enjoy.

As we experiment with colour coding we continue to discover new ideas for interesting ways we can use the feature to make exploring timelines a more engaging experience. If you have any other ideas of how to use colour coding, or specific timelines you would like to see colour coded please let us know in the comments or on social media, we would love to hear your ideas and if possible will make any colour coded timelines you request.

“if possible we will make any colour coded timelines you request”

If you would like to know more about how these timelines were colour coded and how you can gain access to help test new features, you’ll find more information at the bottom of the page.

The following list are the timelines we have colour coded so far, including a key to show you what the different colours on each timeline represent, I will continue to update this list as we create more colour coded timelines.

We have updated our Novels by Isaac Asimov timelines with his different series grouped by colour.

This is a new timeline we have added to the directory comparing 4 of the top directors in recent history.

Learn more about these 4 incredible directors as we use the timeline to compare the careers of these 4 great film makers. FILM DIRECTORS COMPARISON TIMELINE

Another interesting improvement to an existing timeline, this version now lets you see the different types of works that are on the timeline.

As with our previous version of this timeline, only DaVinci’s major works are shown, in the future custom events will allow us to expand this timeline.

Descendants of Alfred the Great by royal house*

You may notice not all the Descendants have been categorised and there are some houses not highlighted. Let us know who is missing and we’ll make the improvements.

With the recent release of the Batman V Superman film it seemed fitting to use our colour coding feature to compare their different films.

See who won the battles of the films on our recent post: Batman V Superman – who has the best films?

This is a combination of two existing timelines (Clint Eastwood filmography and Films directed by Clint Eastwood). With colour coding we can combine both timelines and get a detailed overview of the full filmography.

Clint Eastwood is one of the few big name actors who have gone on to become highly respected directors. Now with colour coding you can track his transition from actor to director.

Missions to Mars by Mission status

A definite improvement to our original Missions to Mars timeline, our new version shows you the status of each mission.

This colour code totally transforms this timeline, allowing you to follow the story from the early failures to the missions which are still active, and even the ones planned for the future.

Our Video Game consoles timeline has also been updated, it now shows the major brands in different colours.

We have starred the major consoles from each generation to make sure they remain visible.

A master of historical fiction, with several long series of books in his bibliography.

You have to zoom into later part of the timeline to reveal more events, including the excellent series “The Saxon Stories”.

Our FIFA World Cup Timeline has a unique colour code, with each colour representing the colour of the team’s kit.

Limited colour range makes some of the choices a bit strange and some teams have been given away colours.

This timeline which already existed in our directory was begging to be colour coded when we first made it last year. Finally, it’s time has come!

Films based on Marvel or DC comics

Another existing timeline that has been waiting for a colour code. It’s now impossible not to see how the majority of films being made has switched from DC to Marvel in the past few decades.

Make sure you zoom into the later years on the timeline to uncover all of the MCU films.

Again colour coding has added an extra dimension to an existing timeline by allowing us to see all of the bond films, easily identifiable by which actor played the title role.

The original Casino Royal from 1979 doesn’t make it onto the timeline, but the non Eon Productions bond film (Never Say Never Again) does.

*Colour code was applied using Wikidata queries: In the same way we are able to use Wikidata queries to create timelines, we are now using these queries (including sparql) to apply the colours to these events. To learn more please get in touch or join the community. (see below)

The Next Step: Filtering The Timelines 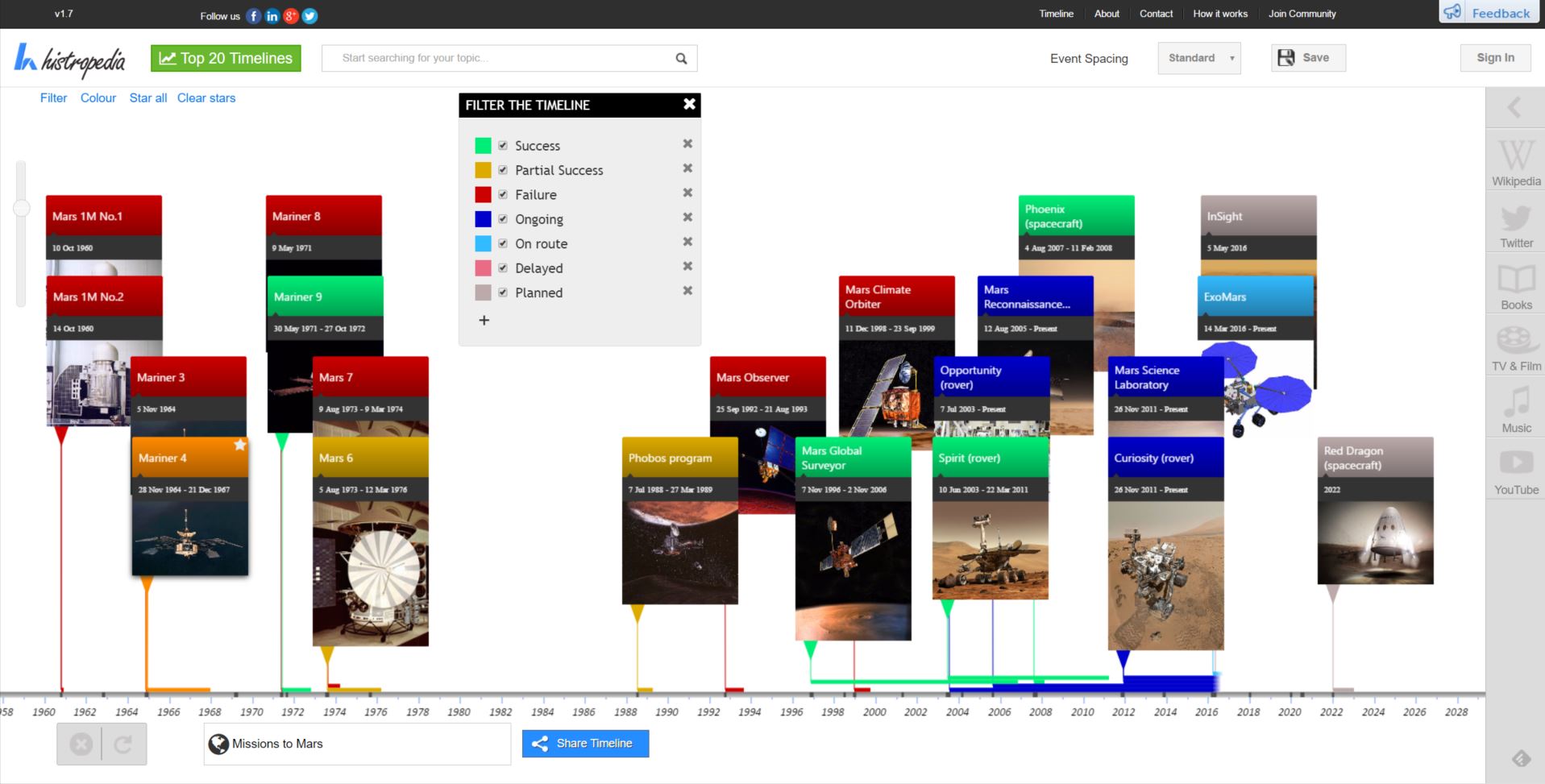 We have colour coded each of these timelines manually (or semi manually with the use of Wikidata Queries), however when we implement this feature properly the colour coding will be done automatically for each timeline. We will of course also include the ability to let you create custom colour codes for your timelines.

“join the community and gain access to the latest Histropedia mods”

If there is enough demand for this simple manual coding system we will try and release it sooner, possibly as a browser plugin. If you really can’t wait and want to start colour coding timelines and using a filter panel, you can join the community and gain access to the latest Histropedia Mods that will let you test these prototype features.

LEARN MORE ABOUT THE COMMUNITY HERE

Please let us know what you think of these new colour coded timelines, do you have any other ideas for colour coding timelines? Remember if you request a timeline to be colour coded we will make it for you if possible!

“Remember is you request a timeline to be colour coded we will make it for you if possible!”

To request a timeline to be colour coded or to give any feedback on these colour coded timelines either leave a comment below or contact us directly.

You can also find us on Social Media