When we are busy creating new things, we sometimes forget to tell the world what we are doing. So here is a long overdue and hopefully very exciting update on what’s being going on at Histropedia recently.

The Biggest news is the launch of HistropediaJS, a JavaScript library that renders timelines using the same core engine as the main Histropedia site.

The Library allows any data source to be visualised as an interactive timeline, with options for custom styling and features to be rendered with the timeline. 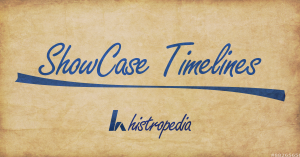 The HistropediaJS library also allows us to create our own ShowCase timelines and applications that are not possible or relevant to the main site (yet!)

We have launched with two ShowCase timelines, one is a highly customised timeline showing the presidents of the united states, and the other is a new Wikidata Query Viewer.

ShowCase Timeline – Presidents of the United States of America

This timeline shows the presidencies of all 44 Presidents of the United States of America. The events span the time each President was in office, and are colour coded by their political party.

There is also an option to filter the timeline by political party and a reading window with the Wikipedia article. Unlike standard Histropedia timelines, this timeline should work reasonably well on mobile and tablet devices.

Visit the US Presidents ShowCase timeline

The other ShowCase we have released is our Wikidata Query Viewer.

This tool allows you to enter a Wikidata SPARQL query (ask a very complicated question of Wikidata), and have the results display as an interactive timeline. The tool can also create colour coded filters based on the query data.

You will need to be able to write SPARQL queries to use this tool to create timelines, but you can still enjoy timelines created from existing queries.

Enter a SPARQL query to create a timeline here.

Next Steps and potential collaborations

One of the main reasons we have created HistropediaJS is because there is data out there that cannot be included on the main site, and we are really excited about the possibilities of visualising of other data sources and forming new collaborations.
We will also continue to create our own ShowCase timelines to demonstrate different uses for HistropediaJS. Most of these will be based on more advanced uses of Wikidata and new features that will eventually end up on the main site.

If you are intersted in using HistropediaJS, have any ideas / requests for ShowCase Timelines or would like some help creating a sparql query please get in touch, leave a comment below or contact us on twitter @SeanMcBirnie/ @histropedia

The Amazing Power of Wikidata