Books are a wonderful thing.

They transport us to new worlds, let us explore new ideas and teach us something new about ourselves.

Throughout history there have been many amazing authors who have produced works that have had a profound effect on humanity and without doubt represent a very important and insightful area of human history.

To help you explore this area of history, or simply to browse some amazing books, we’ve been updating the literature category of our timeline directory with bibliography timelines for some of history’s most famous authors. 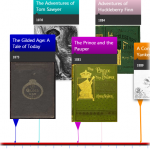 “Samuel Langhorne Clemens, better known by his pen name Mark Twain, was an American author and humorist. He wrote The Adventures of Tom Sawyer and its sequel, Adventures of Huckleberry Finn, the latter often called “the Great American Novel.” 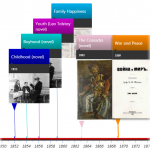 “Count Lev Nikolayevich Tolstoy, also known as Leo Tolstoy, was a Russian writer who primarily wrote novels and short stories. Tolstoy was a master of realistic fiction and is widely considered one of the world’s greatest novelists.” 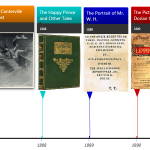 “Oscar Fingal O’Flahertie Wills Wilde was an Irish writer and poet. After writing in different forms throughout the 1880s, he became one of London’s most popular playwrights in the early 1890s. Today he is remembered for his epigrams, his only novel (The Picture of Dorian Gray), his plays, and the circumstances of his imprisonment and early death.” 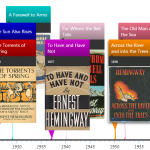 “Ernest Miller Hemingway was an American author and journalist. His economical and understated style had a strong influence on 20th-century fiction, while his life of adventure and his public image influenced later generations.”

Timeline of Novels By Charles Dickens

Novels and other works by Stephen King

Timelines of books and short stories by Ray Bradbury