The Heroic Age of Antarctic Exploration Started in the late 19th century and continued till the end of the first quarter of the 20th century.

The major objective of many of the expeditions was to be the first party to reach the Geographic South Pole. A feat accomplished by Roald Amundsen during his 1910 – 1912 expedition. Amundsen arrived just 5 weeks ahead of Robert Falcon Scott’s party of the Terra Nova expedition.

The Timeline shows all of the major expeditions during this period. 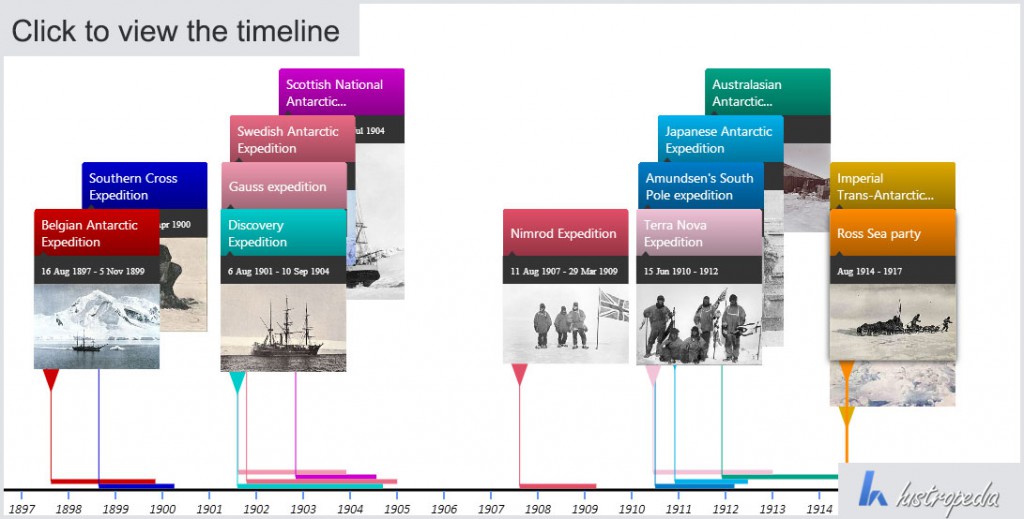 Summary of the Timeline

Marks the beginning of Heroic Age of Antarctic Exploration and was the first expedition to winter in the Antarctic.

First party to land on the Great Ice Barrier.

First expedition led by Robert Falcon Scott. Among the crew were many other pioneers of the age including: Ernest Shackleton, Edward Wilson, Frank Wild, Tom Crean and William Lashly.

Considered last major expedition of the age, it became an amazing feet of survival and endurance after the party became stranded, forcing them to separate as Shackleton and  others set out in one of the lifeboats in search of rescue.

Last expedition of the age and Shackleton’s last Antarctic mission. Shackleton died on board shortly after the expedition reached the  sub-Antarctic island of South Georgia.

Explorers from the Age of Discovery

Today in 1452: The great Leonardo Da Vinci was born

Films based on Marvel and DC Comics

Timeline of Publications in Mathematics