Explorers from the Age of Discovery

Continuing our current theme of the history of exploration today’s timeline looks at some of the most important explorers from the Age of Discovery. 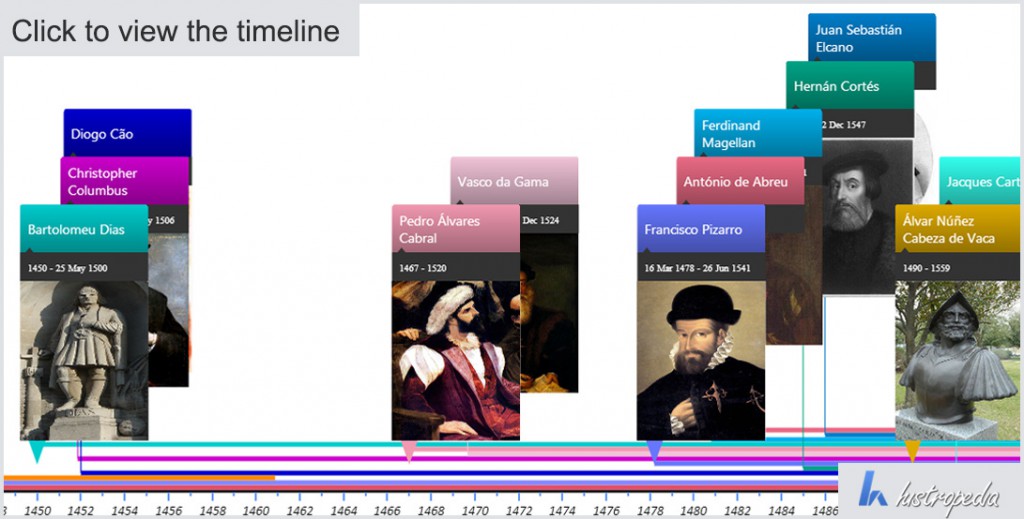 “The Age of Discovery is a historical period of European global exploration that started in the early 15th century with the first Portuguese discoveries in the Atlantic Archipelagos and Africa, as well as the discovery of America by Spain in 1492, and the discovery of the ocean route to the East in 1498, and by a series of European naval expeditions across the Atlantic and later the Pacific, which continued until the 18th century”

This is by no means a complete list, rather an overview of some of the more important explorers of their time who have been selected for this timeline for their involvement in some of the major explorations of the age.

Highlights from the timeline

In 1488 Dias become the first European to sail round the southernmost tip of Africa.

Although Columbus wasn’t the first European to reach America, his voyages Between 1492 and 1500 led to the first lasting contact between Europe and America and initiated the Spanish colonization of the New World.

In 1498 Gama became the first European to reach India directly by Sea. The route was one of the most important discoveries during the Age of Exploration and paved the way for the Portuguese colonial empire in Asia.

Magellan’s expedition of 1519–1522 was the first to connect the Atlantic and Pacific (the passage was made via the Strait of Magellan) and the first to cross the Pacific. After Magellan’s death in the Philippines Elcano took command and completed the first circumnavigation of the globe.

View the entire timeline to discover more amazing explorers and learn about the expeditions that made them famous.

tagged with Age of Discovery, exploration