Explore every FIFA World Cup since it began

The 2014 FIFA World Cup is almost here. As excitement is building we have a World Cup Timeline, so you can explore every World Cup since football’s biggest competition began in 1930.

You can get all the facts and stats for any year from the Wikipedia article in the reading window, and make sure you check out the YouTube tab! you’ll probably find highlights for that year’s competition. 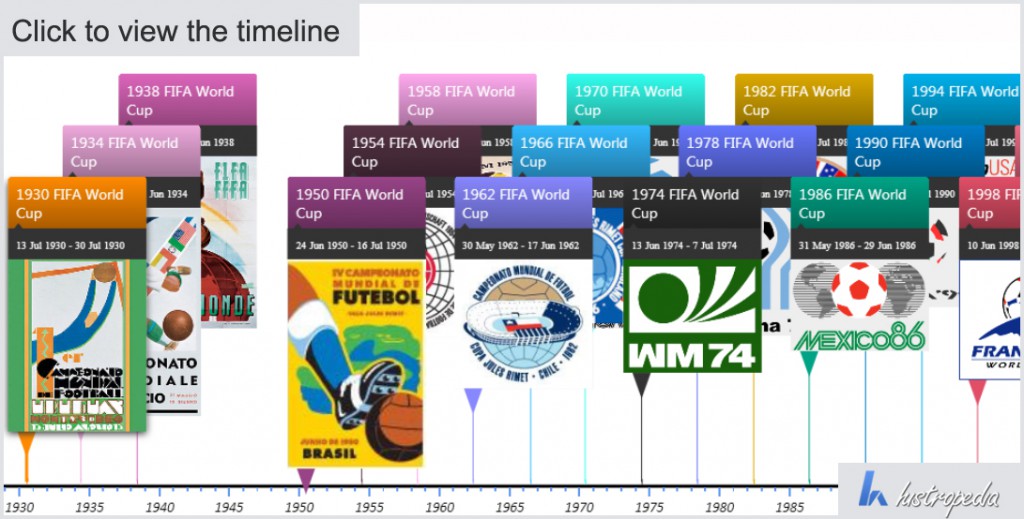 On a mobile device? Unfortunately Histropedia isn’t yet optimised for mobiles or tablets. For the best experience you’ll want to bookmark this and check it out on a desktop or laptop

11 INTERESTING FACTS FROM THE TIMELINE

1930: The first World Cup is held in Uruguay. The hosts beat Argentina in the final, becoming the first nation to win the World Cup.

The 1942 and 1946 World Cups were cancelled due to WW2. It returned in 1950, hosted by Brazil, and would see England make their World Cup Debut.

The record for biggest attendance in a World Cup match is 200,000 people, it  was set in 1950 during the final between Brazil (hosts) and Uruguay

The 1954 World Cup, held in Switzerland, was the first to be televised.

In the run-up to the 1966 World Cup, held in England, the trophy was stolen! It was found a week later by a dog named “Pickles”.

In 1970 Brazil became the first team to win the World Cup 3 times.

The World Cup trophy as we know it today was first awarded in 1974. The original trophy (Jules Rimet Trophy) was awarded permanently to Brazil in 1970.

The 1994 World Cup, held in the USA, was the first World Cup to be decided on Penalties.

The current format of 32 teams was first introduced in the 1998 World Cup held in France.

The 2014 World Cup, held in Brazil, will be the first world cup to be hosted in South America since 1978, when it was held in Argentina.

There have been 8 different teams to Win the competition

The following teams have won more 3 or more World Cups

This year’s World Cup will be the 20th World Cup.

Brazil is the only team to have played in all 20 World Cups.

How has the World Cup changed since 1930. 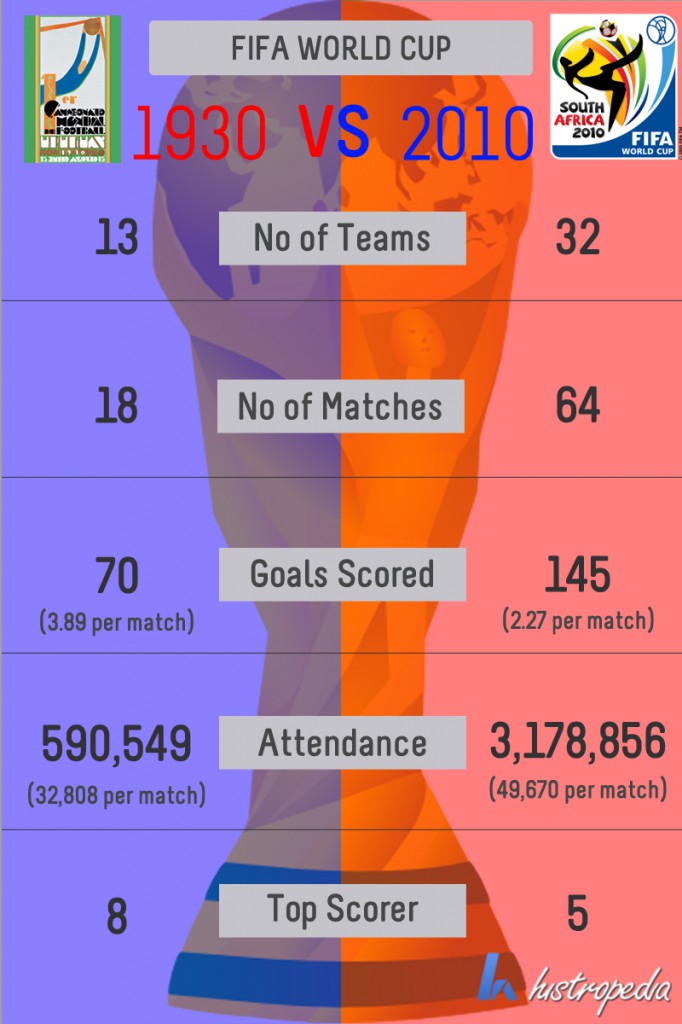 View the entire timeline to discover more amazing World Cup Facts, and which ever team you may be supporting I wish you good luck!

On a mobile device? Unfortunately Histropedia isn’t yet optimised for mobiles or tablets. For the best experience you’ll want to bookmark this and check it out on a desktop or laptop.